When my older daughter, Katie, started kindergarten, she initially did well in math because the first two months were just a review for her. We played some number games during the summer before she entered kindergarten. When the teacher started covering topics that I hadn’t taught her, she started struggling. I recall she came home one day, dejected, and she told me that she was not good in math. So I started tutoring her in math using the Connecting Math Concepts program, and it took us five months to finish. Even before she completed the program, I noticed her excelling at math in school again.

Her school used the Envision 2012 program. It was a lot prettier than the program I used. It had fun characters in their worksheets. It even had interactive videos which the teacher played in class. The worksheets were very colorful. However, the reason my daughter was struggling was because it did not offer enough repetition for the lessons to be internalized. The topics were tackled for a week or two and then the class moved on another topic without reviewing the previous ones. When the topics that were already covered were needed again, the kids had forgotten it already, which added to the frustration as they were covering new concepts.

When kindergarten was over, I started Katie on ST Math. She completed the kindergarten and first grade math curriculum before she started first grade. She liked it a lot as it uses play-based math games. She is now attending a Gifted and Talented Education (GATE) program. Everyone in her class were identified as gifted/high achievers. Although her current math class is more advanced, she is not struggling at all because she was able to internalize the kindergarten concepts.

After my experience with teaching Katie how to learn math, I am now applying what I learned to teaching Jessica. Jessica is only 3-1/2 years old, so I cannot use Connecting Math Concepts (CMC) yet. CMC is quite boring for a young girl to learn math. So, I started teaching her math using games. From the picture below, you can see the number train that Jessica put on the board. I love these numbers. You can do a lot with them. Some days, she sorts the numbers into groups of 1s, 2s, etc. Some days, I’ll ask her for the numbers and if she picks the correct number, I put the number in a bowl. I call it the number soup. She’ll pretend to eat the bowl of soup when she’s done. Currently, she’s learning the numbers from 0-5. When she has mastered it, I will introduce new numbers one at a time. 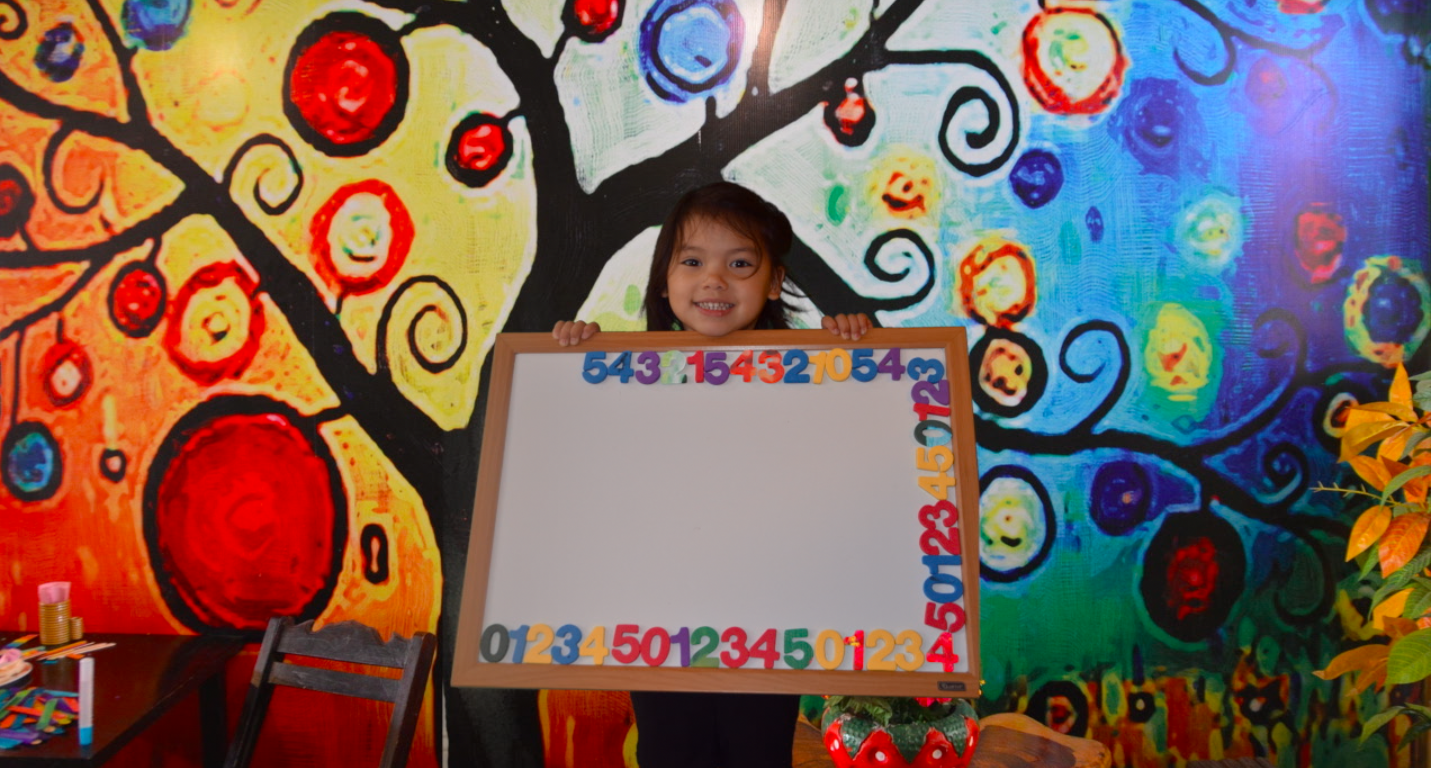 I bought this number set from Amazon. You can find the link below. If you have time, you can just cut the numbers from an old cardboard box. I just find buying them easier. It saves me time and they’re also sturdier.

I have always been interested in Montessori’s play-based learning method. So, I try to incorporate learning through playing in our lessons. One of the games that my kids like to play with are pattern blocks. The kids can copy the blocks from the pattern, or they can come up with their own pattern. I also like to ask give them multiple blocks which they can use to form a big triangle, square, pentagon, etc. They start to exercise their problem solving skills while having fun at the same time. From our playing sessions, they realize that in order to form a new shape (e.g. hexagon), they can use other shapes (e.g. two trapezoids) and combine them in order to form this new shape. 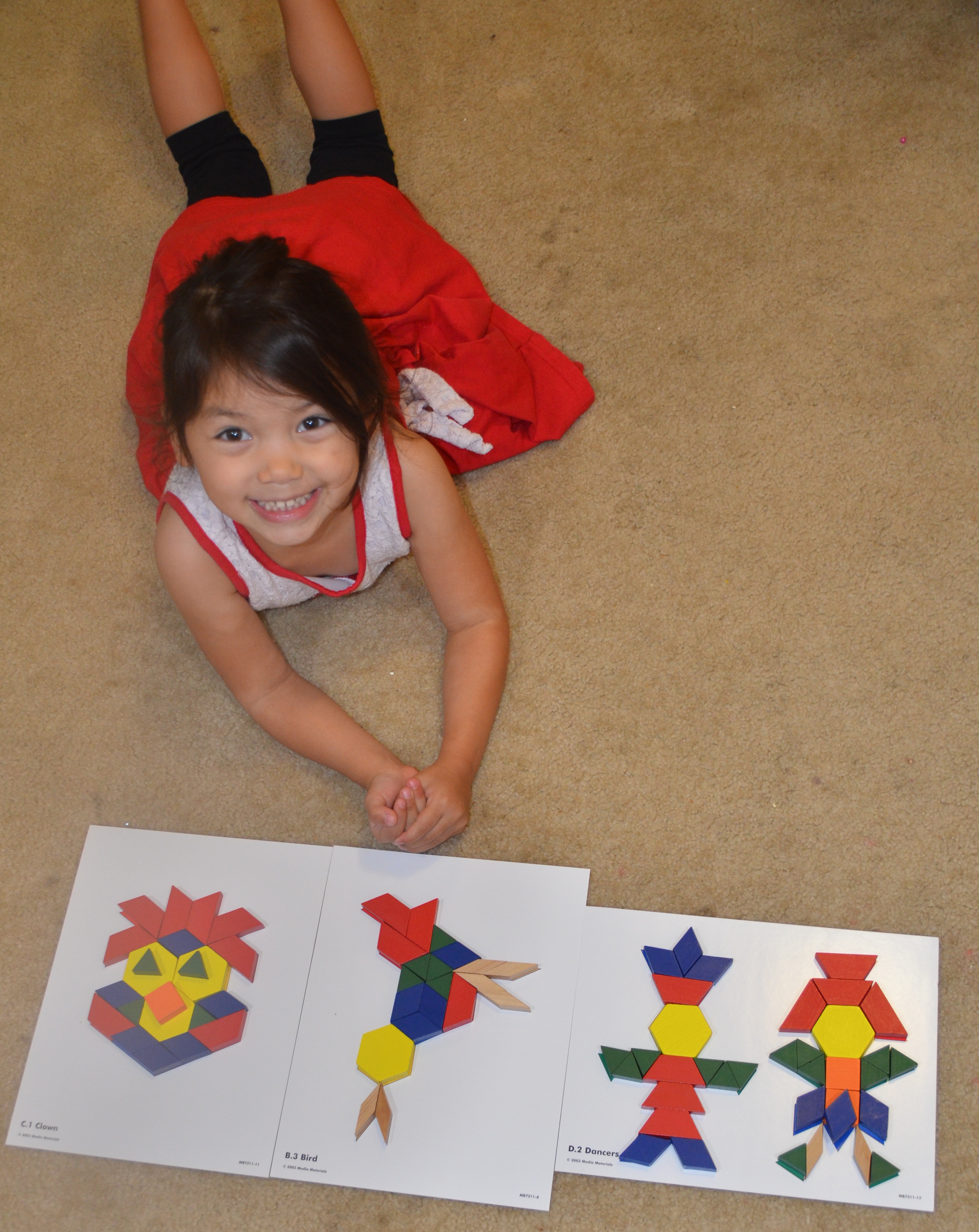 Below are the materials that Jessica used in the picture. You don’t need to get these materials. If you have time, you can cut an old cardboard box to make the shapes.