My daughter, Katie, has always been interested in reading. Back when she was two, she often went to her bookshelf to get books for my husband and I to read aloud to her. After reading a book or two, I would told her I would read again the following day. She used to beg me to teach her how to read because she wanted to be able to read by herself after I was done reading to her. I wanted to support her desire to read independently, so I bought several books on how to teach kids to read. One of them is Montessori Read and Write: A Parent’s Guide to Literacy for Children

. I wasn’t very successful with this because it took me a long time to read the book. I was working about 35 hours at the time, so I didn’t have time to put into practice the suggestions that the book suggested. Also, implementing them would take a lot of preparation time. I still tried some of the techniques like using movable letters and using sandpaper letters for tracing. However, it was too much effort and I didn’t have a lot of time. I wasn’t also getting the results quickly enough so I lost interest in using the techniques.

After giving up on figuring how to implement the Montessori method in teaching how to read/write, hence, I signed up for ABCMouse.com. I had read a lot of reviews from families whose kids learned how to read from the website so I gave it a try. Initially, I put her in level 5 which is the level for kindergarten. She didn’t know most of the lessons.  She forgot the letter sounds that she had learned from the Montessori preschool that she used to attend, so she had to start from the beginning. She started on level 1, over a year ago. After 4 months, she had completed levels 1-4. At this point, she still couldn’t read. She memorized some words after completing the same lesson over and over. She did learn all the letter sounds after completing level 4. However, she couldn’t blend sounds together. Although I was reading aloud to her for at least an hour a day, she was never content. She wanted me to read more and my throat was very sore after reading to her, so I was very motivated to teach her how to read. Whenever I told her that story reading was over for the day, she told me that she wished she knew how to read.

After searching for another way to teach my child how to read, I found a book called Teach Your Child to Read in 100 Easy Lessons

in Amazon.com. It had great reviews. Most kids who were taught using this book were learning to read quickly. I got the book and sure enough, my child was making progress a little everyday. We worked on it consistently. By the end of lesson 100, which took about three months, she was able to read well. I took this picture right after she completed the book. As you can see, the book was worn out. I promised her a prize if she stuck to her lessons and she picked out a Mulan fan for her prize. 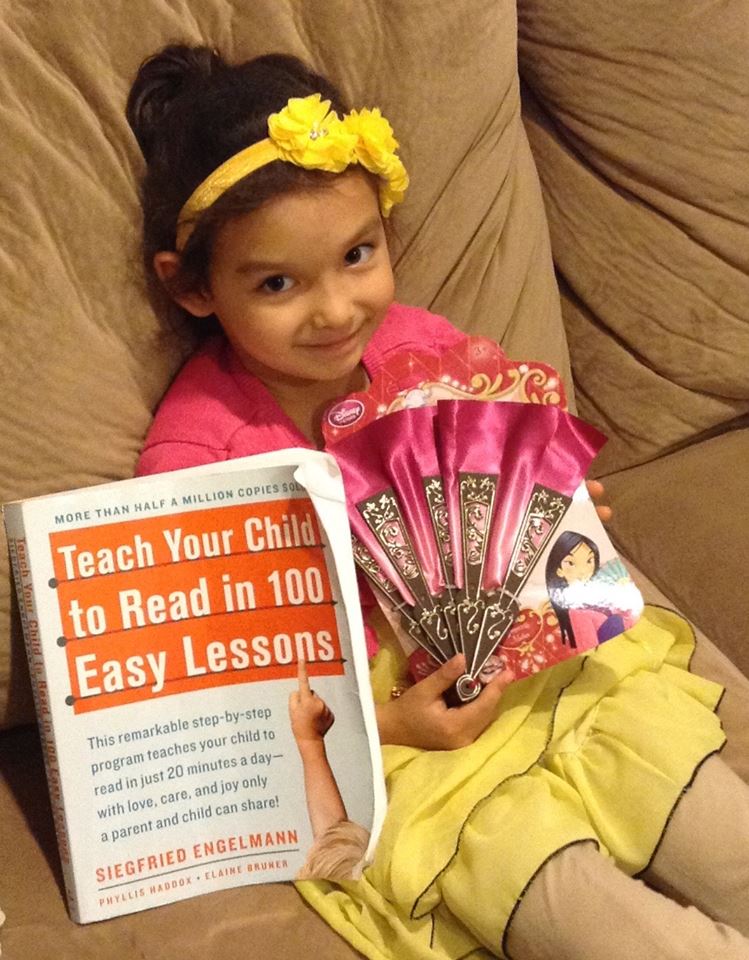 I gave our copy of this book to the mother of one of the kids in Katie’s class. His mom said that his reading wasn’t very good. I talked to her this morning, and she said that they are at lesson 70 and her son’s reading skills have improved a lot. His progress wasn’t as fast as Katie but the teacher suspects that he has dyslexia.

At this point, Katie was very excited to read books herself. We went to the library, and she picked out books from the easy reader section. However, some of the books she picked out were still too hard for her. The books used a lot of words that weren’t easily decodable.

By this point, Katie has entered kindergarten. The school that she went to also provided two computer reading programs. They were called iSTATION and Headsprout.

At the beginning of the school year, she was using iSTATION at school. iSTATION conducts reading assessment monthly through games. She tested in the top 13% for the first assessment. Although the website claims that this is an adaptive program, my daughter found it boring after a few weeks. She had advanced in her reading so much that the games she was being asked to play, which were based on identifying letters, became boring. This was after being given an assessment for first graders. Based on the results, she had the same skills as a first grader midway through the school year.

A few weeks later, their class switched to using Headsprout.com. Headsprout has two sections. One is for early reading skills which spans from K-2 and the other is for reading comprehension skills which is for grades 2-5. Katie completed the early reading program in less than 3 months. However, after completing the program, she still couldn’t read some of the words in I Can Read Level 1 books. Headsprout.com started out very slow and then accelerated very quickly in the last few episodes. I do not think there was enough practice for the sounds in the last few episodes.

. This program was created by the Siegfried Engelmann, the same author of Teach Your Child to Read in 100 Easy Lessons

. This program has 120 lessons for Funnix Beginning Reading and 100 lessons for Funnix 2. Based on the placement test, I started Katie on lesson 80 of Funnix Beginning Reading. This program teaches reading at a slower pace. It is designed to be used in a classroom setting for two years, but it can also be used at home as long as you have access to a computer. No internet is required to use this program. It works on both Mac and Windows-based systems. At the end of Funnix 2, she was able to read books such as Biscuit Storybook Collection

and other I Can Read books such as Amelia Bedelia Makes a Friend (I Can Read Level 1). She was also able to read several books from the Mensa For Kids Excellence in Reading Program by herself, including Charlotte’s Web, which was one of her favorites from the list. Here is the link to the reading list that shows which books she had already read.

At this time, I do not actively use a program to teach her how to read. She is using Raz Kids which is provided to her in her school, and she picks out books from Scholastic Reading Club and the library for entertainment.

This site uses Akismet to reduce spam. Learn how your comment data is processed.